Home FORNITE PUBG Fortnite vs PUBG Mobile? Which One is Better?

Fortnite vs PUBG Mobile? Which One is Better?

Shocutrtgame.com - Fortnite vs PUBG Mobile? Which one is better? This time I will provide information about the 2 battle royale games that are currently triumphant, with very many users even trending in almost all over the world. If you look at the graphics and appearance, the 2 game battle royals are not much different. PUBG with a look and graphics that are like war will actually spoil your eyes when playing this game, ranging from graphic figures, weapons, vehicles, to buildings that look like in the world. If it is played on a smartphone or on a PC, the appearance and graphics that look really like it makes no difference when played on 2 different platforms. As for Fortnite, although in terms of appearance and graphics, genre and overall almost the same as PUBG, but there is a slight difference between the 2 battle royale games, so let's discuss, Fortnite vs PUBG mobile! Which is suitable for you? Read More: Fortnite Unblocked at School 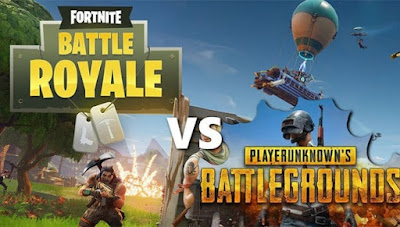 If you look more closely at the graphics of these two games, you can definitely see a striking difference. In terms of graphics, PUBG looks more like a real war, like the real world. As for Fortnite, the look and graphics look more like animated cartoons.

2. The PUBG map is bigger than the Fortnite.

Although the difference in maps is very striking, it does not mean that PUBG mobile with the larger maps has no shortcomings. I think large or small maps between PUBG mobile and Fortnite must have advantages and disadvantages of each. For Fortnite, with a small map requires users to think quickly, starting from building strategies to attack the enemy to building defenses. Fortnite is perfect for those of you who like fast and thrilling games from the beginning to end. Maps in the PUBG are bigger, requiring you to move with vehicles to get to safe areas. The game time will also be longer. This game is suitable for those of you who like slow and tense games at the end of the game.

Not only in terms of realistic graphics, from the time the game for mobile PUBG is long enough, but it is also an advantage for you to gather more weapons, find shelter, and make a precise strategy. But for those of you who don't like to play for a long time, maybe this will make you bored. Meanwhile, for Fortnite has a gameplay that is relatively faster when compared to PUBG mobile and requires you to think quickly, and be aware of the enemy, and as soon as possible find a weapon if you do not want to be killed early. Read More: Play PUBG Games on the MacBook, iMac, Mac Mini

For updates, Fortnite may be superior to PUBG mobile. If you are Fortnite users, almost every week you will see the latest update from Fortnite, starting from the menu features, other items. Even so, many Fortnite users are annoyed with updates that are too frequent, it's because of the large patch size and makes your internet quota run out quickly.

In terms of accessibility, Fortnite is clearly superior. That is because you don't need to spend money to enjoy this game. As for PUBG mobile, you have to pay approximately 15$ to be able to download and get an account. Meanwhile, Fortnite and PUBG mobile also provide paid content in the form of loot crates.

Maybe it's a little difference between Fortnite vs PUBG mobile that I can share with you, hopefully, it is useful and can be a reference for you to choose one of the games that are currently successful and you think it is more suitable for you. Leave suggestions and criticism directly to the contact on the website, because the comment column temporarily closes due to a lot of spam. Don't forget to visit Shortcutgame.com again, because there will be more information about the latest games. Thank you for visiting.