Home FORNITE GAME Fortnite collaboration with Air Jordan begins, how does it result?

Fortnite collaboration with Air Jordan begins, how does it result?

Shortcutgame - Again, Epic Games has unrelenting collaboration with many parties. If previously they had collaborated with the film John Wick 3. This time they brought the famous shoe brand Nike Air Jordan into the game Fortnite. The collaboration will be presented in an event called "Downtown Drop ". In this event, there is a new mode that resembles that of the game Sonic where the players have to get the coin to be the winner. Read More: 6 Tips to Become a Pro in Fortnite Battle Royale 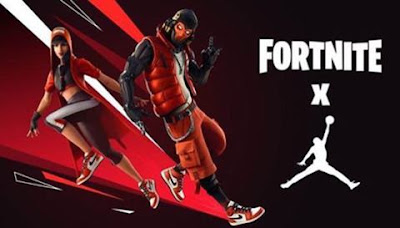 After revealing the cooperation that intertwined with Air Jordan, Fortnite has now released a video to give the user an idea of what will be present in the Epic Games Battle Royale game from this collaboration. This collaboration will introduce two new characters as part of the "Hang Time" Bundle: The Grind is a masked skateboarder and Clutch as a hoody-based basketball. Naturally, both characters wear Nike Air Jordan 1 Shoes!

In the two default skins, they wear the classic Nike Air Jordan 1 Shoes "Chicago". However, from the trailers posted by Epic Games shows that they also wore the new Nike SB x Jordan 1 collection of "NYC to Paris" and "LA to Chicago" which would also be released in real life this week. To unlock this extra style, you have to complete the challenge alongside both characters. In addition, Epic Games also added a new limited time mode named  "Downtown Drop ". This Mode makes you compete with other players to "glide" down the big hill, crash into fences and vehicles, and jump over slopes, and other obstacles. Read More: 6 Fortnite Facts - Games That Now Compete With PUBG

To achieve victory, you have to collect coins and color the most tiles. Like a shadow, this mode is like the Tony Hawk Downhill Jam combined with Sonic The Hedgehog. Downtown Drop also comes with its own unique set of challenges. The first challenge requires you to "change the color of 1000 tiles". Completing this challenge will bring you a new skateboard and other street accessories for your character.

You are new to feel the result of this collaboration after the update on May 22, 2019.