Before discussing further, the Smartphone for its games is not emerging today, but it has been a long time ago. Starting from Nokia that makes a gaming-specific Smartphone in Nokia N-Gage Classic, which is continued with N-Gage QD. The second selling Smartphone for this game itself was very successful. Then in the smartphone era, emerging Sony Ericsson Xperia PLAY gaming Smartphone, which offers a PlayStation playing experience. Then there's also Acer who is joining the gaming Smartphone Market by launching Acer Predator 6 and Acer Predator 8. 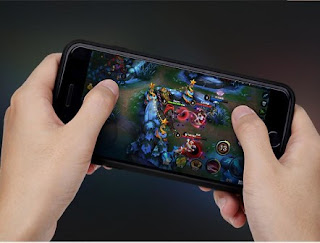 Now, more and greater producers are interested in creating the best gaming smartphones. Unmitigated, the specifications embedded in this gaming Smartphone are very high up to the flagship Smartphone. The price of gaming smartphones offered is quite varied, although most are still very high. However, it is already comparable to the satisfaction that will be in a can.  Here's a list of 10 best Gaming smartphones for heavy gaming in 2019:

Although hard to find, but HTC U12 + for gaming capabilities worth considering. One of them is the use of screen measuring 6-inch resolution Full HD + 2280 x 1440 pixels. This screen is claimed better than the existing 6-inch screen because it has support HDR10 and DCI-P3. Moreover, HTC immerses the protective Gorilla Glass 5 complete with IP68 feature so that it is dustproof and anti-splashing water. HTC U12 + also carries a Snapdragon 845 processor with 6GB of RAM and 128GB ROM.

The Huawei Mate 20 Pro brings out the power of the three Leica cameras on the back. But indeed, the Smartphone is also very tough to be used as a gaming Smartphone. What's more, just look at the latest chipset planting and the current highest of the Kirin 980 with 6GB RAM support. The processor is manufactured with 7NM process technology that experiences improved performance and user experience, including gaming. The screen size is 6.39 inches wide with a resolution of 2K + (3120 x 1440p). The Mate 20 Pro screen has an aspect ratio of 19.5:9.

The OnePlus 6T is a reformed version of the OnePlus 6 that comes with a larger screen than its predecessor. Where OnePlus 6T comes with a screen size of 6.41 inch patterned Optic AMOLED resolution of 1080 x 2340 pixels.  The aspect ratio has also been 19.5:9 which is widely supported by notch water droplet-shaped. Very convenient for the eyes because it can display the best graphics. Moreover, the capabilities of the Snapdragon 845 processor with a combination of 6GB RAM or 8GB RAM is no doubt.

ASUS delivers the Zenfone 5Z series with slightly better specs than Zenfone 5. One of them is from the processor usage side, where the Zenfone 5Z already uses the Snapdragon 845 processor. To deliver a better gaming experience, you can choose ASUS Zenfone 5Z in 8GB RAM and 256GB ROM. Because with this configuration, it is ensured that all games can be played smoothly without hang. However, for the cheaper price of ASUS Zenfone 5Z, There is a 6GB of RAM version.

Our experience of playing all games on Xiaomi Pocophone F1 is quite satisfying. The integrated Snapdragon 845 processor with 6GB of RAM is capable of delivering qualified power for any game. No need to worry about hot devices while playing, because Pocophone F1 has been equipped with the cooling technology LiquidCool Technology. Playing the game is quite satisfied with the 6.18 inch IPS screen with a resolution capacity of Full HD + 2246 x 1080 pixels in 18.7:9 ratio.

Compared to the Samsung Galaxy S10, the Samsung Galaxy S10 + specification is more convenient to become a gaming Smartphone. Because the series has a larger screen measuring the 6.4-inch resolution of 3040 x 1440 pixels with support panel curved Infinity O HDR10. This heavy gaming Smartphone is powered by the Exynos 9820 Octa (8 nm) chipset with the Mali-G76 MP12 GPU.

The specification of Xiaomi Mi 9 is fairly capable and contemporary. The performance alone has been powered by the Snapdragon 855 processor which will be the standard on the flagship Smartphone output year 2019. This processor will be built in 6GB or 8GB of RAM with the internal storage capacity of 64GB, 128GB, and 256GB. Xiaomi Mi 9 also looks modern with a waterdrop display.

The screen has an area of 6.39 inches complete with Super AMOLED tech panels. The no less interesting specification of Xiaomi Mi 9 is on the use of three rear cameras with a 48MP + 16MP + 12MP configuration using the Sony IMX 586 sensor. As for the front camera is 20MP resolution.

The successor to the Black Shark comes with a higher spec. Although it is still using the same processor that is Snapdragon 845, Black Shark Helo has been in the RAM up to 10GB. However, there are also 6GB and 8GB RAM options. It has been imagined how this gaming Smartphone's capabilities in devouring all the heavy games though.

Not only performance but helo display also increasingly shiny with an AMOLED display covering an area of 6.01 resolution FULLHD + 1080 x 2160 pixels. Although presented specifically for gaming, but not forgetting other sectors. In the photography sector, there are dual 12MP + 20MP cameras with an aperture of f/1.75. While on the front attached a 20MP camera with an aperture of f/2.2.

For RAM and ROM, there is a variant of 8GB RAM 128GB as well as RAM 6GB ROM 64 GB. Although this Smartphone is intended for gaming, the camera features it turns out to be very good because it uses dual-resolution rear camera 12MP and 20MP. While the front camera is 20MP resolution that can record 4K video in a 30fps framerate.

The best gaming smartphones adopt the design of the ASUS ROG laptop inscribed with the Republic of Gamers on the rear body, coated with Corning Gorilla Glass on the front and back sides and equipped with two speakers placed at the front of the body. ASUS ROG Phone also has a compact shape with a 6-inch panel of AMOLED 2160 x 1080 pixels. Moreover, the screen has a refresh rate of up to 90 Hz with a 10,000:1 contrast ratio.

In the kitchen sector, the race relied on the high-end chipset of the Qualcomm Snapdragon 845 with 8GB of LPDDR4X RAM support. To support gaming needs to be maximized, the ASUS ROG Phone also embeds a 4,000 mAh battery with a fast-charging feature. Not only that, there are gaming accessories that can be purchased separately such as external cooling, mobile dock to the game controller.