Current technological advances are very fast, certainly making considerable progress as well as in-game development. From technology to developed engines, every game developer creates games that have visual effects that appear increasingly evident in each game. But unfortunately not everyone can enjoy it because the PC specs are low, you can only play a light game so the computer or gaming laptop that you have is not quickly damaged due to the severity of the game specifications needed. 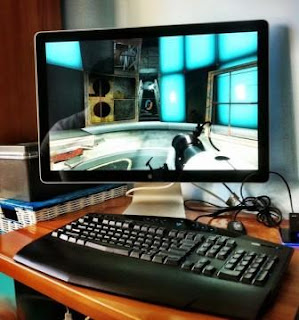 But, do not give up and mourn the fate, because Shortcutgame will give some recommendation of PC games that are lightweight but can fulfill your expectations to get the best experience and satisfaction in gameplay. In terms of graphics, gameplay and stories don't disappoint, so this way you can still enjoy life with a smile while playing games in front of your PC, the following 10 best PC light games at 2019:

It looks like Dark Souls games, but with a lighter size anymore so don't burden your PC in playing. This game offers a fun adventure for you to play. Cool graphics and okay gameplay make a lot of players potato PC games love it. Do you want to try it too?

In the latest series of games overcooked still offers an excitement similar to its predecessor. If you've never played it, this game is similar to the Diner Dash series where you'll play as a chef and work on a menu of already ordered dishes, from cutting groceries to cooking. Besides being lightweight when played using a low-spec PC, this game's gameplay is also fun and challenging.

Series Banner Saga is very interesting to follow, using the background of Nordic mythology story and Turn-Based Strategy you will be brought into the same fun as when playing Final Fantasy Tactics. Pretty challenging stories and adventures are supported with cool visual effects but this game remains light when played on a PC with a low spec.

If the game is usually released with good graphics, then this game has a fairly low visualization but it has quite an interesting animation. While looking at the Disney cartoon movie in the 1930s. Although the game that only requires light specs on the PC is quite fun and difficult to play because it demands the patience of the players.

This life simulation game has reached its 4th series. You can create the character you want and run the life you want, you can be anything here. Being a successful businessman, a party enthusiast who has many friends or instead chooses a career as a criminal. The Sims 4 is the best simulation game on PC that needs light specs in Coverflow.

The Game that carries a theme around farming and breeding very light, simple and pretty good graphics that can be played anyone and on PC anywhere. If you are a fan of Harvest Moon games then this game is no stranger to you, of course with the addition of some cool and multiplayer features that will allow you to play with your friends.

The Game that is adapted from smartphones is really fun to play and does not need heavy specs in Coverflow. Even if your PC only has 1GB of RAM you can still play it smoothly. Having an RPG genre, one of the best lightweight PC games offers you the fun of being as if you were playing on a smartphone.

This lightweight, hospital-themed PC Game allows you to organize everything in it like building facilities along with employees, doctors and all things related to hospital operations. If you've ever played the legendary Theme Hospital game, you'll be familiar with this game.

One of the best light PC games has a survival theme created by the creators of This War of Mine game, where players have to survive the long winter that brings people into extinction. The remaining people will develop the steam technology that can be used to fight the extraordinary cold. Your strategy will be properly tested in this game, where you have to optimize and manage the resources in the city for survival.

Lightweight memory and simple graphics do not mean this game is bad and not fun, it is precisely this PC game offers a new adventure wrapped in a turn-based strategy concept. Simple graphics but with interesting visual effects make this game quite fun to play.
In addition to the much-liked mecha character also adds to your excitement in surviving the alien attack. You can do a lot of things in this game, like customizing the mecha you're going to use and setting up your strategy to keep your defensible from alien attacks from outer space.

Here's a list of the 10 best lightweight PC games in 2019 for you to play on your laptop or computer, even if you don't have the specs, certainly, these offline and online games will not make your PC lag.