Heroes are always a distinct choice of players while they're playing DOTA 2, and they all have unique abilities that differ from one another. Before the start of the match, we anticipate which Hero to use to be able to dominate the game until it wins. And that choice seems identical to most options, but it can be different. 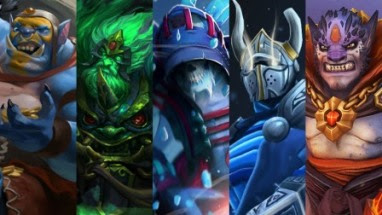 Of all Hero characters in DOTA 2, sometimes we always find some favorite for the character at the top of the list that is most used. Although they are all very different, they have one thing in common: they are very good and easy to play, especially if used to kill the opponent's character.

And below, we'll find a list of Hero characters that are often used in Dota 2 games:

In the top order list, the perched is Pudge. He is one of the strongest gankers and can be disablers in the whole game, with his Combonya skill of three active abilities proving that Pudge is more than enough to kill a fairly fragile enemy Hero at the beginning and mid of the game.

Meat Hook, Rot and Dismember are the perfect blends of skill for Pudge, and it's quite easy if you use it well. This is why, many Pudge characters are the most preferred option, so it is perched with more than 440 million games that use Pudge.

Mortred the Phantom Assassin has the agility and is difficult to hit because he has a Blur skill innate since birth. Mortred has a Coup de Grace ability to inflict surprising damage with a single attack. The ability to synergize very well with each other, although the opponent's enemies are very tough, he can handle it without much trouble. Phantom Assassin ranks second for Hero characters that are often used in matches, where it has been played over 334 million times worldwide.

Sometimes, we don't want to be too close to the enemy to be able to hit it without getting hit by anything. And Hero Sniper becomes a lot of choice for this thing. Kardel Sharpeye The Sniper has the agility as a Carry that is capable of making heavy damage with a remarkable reach.

His third ability, Take Aim, allowed him to handle high DPS at a safe distance, and avoided damage as he was relatively weak. He is also superior to harassing enemies because of his Headshot, and when his enemy is almost powerless and tries to escape, the Sniper lives on his Assassinate skills to finish off his helpless opponent from a very Much. This is why Sniper is the third-order list of Hero characters that are widely used to date in DOTA 2 with over 324 million matches.

Of all Hero characters who have the ability, only Invoker can make a myriad of dangerous skills as if without any boundaries of his abilities. Invoker is a hero character that is very difficult to master if you are still a beginner. He is very unique because he has a total of 14 skills; Three of them – Quas, Wex, and Exort – are reagents and one Invoke is a special ultimate. These three abilities serve as basic materials or components to create new abilities to destroy the enemy.

The right combination and play with Smart will make Invoker the most difficult Hero character to handle. And this is why Invoker fell 4th by more than 302 million times played from all matches.

Yurnero Juggernaut is a very agile and marvelous Hero character from every skill he has. This melee hero's agility can allow him to run straight into battle and finish off the enemy with the invisible abilities of Omnislash as it is amazingly fast, as well as the Furry Blade's ability to make Yurnero's sword is spinning that cannot be stopped. Juggernaut perched 5th with over 283 million players from all the DOTA 2 games to the present.

Slark is a melee Hero who can harness his ability to jump straight into enemies with Pounce's skill and sneak out without obstacles with his Shadow Dance abilities. He is a very mobile ganker and can finish off the enemy without many obstacles. Slark ranks 6th with over 253 million plays from all matches and is quite a favorite of players in DOTA 2.

Of course, playing without being able to see the enemy is something fun. And Riki The Stealth assassin has it all. He is a close-up Hero with the main Agility that uses the Clock and Dagger abilities at the beginning of the match so that he can be invisible to the enemy, sneak and surprise the enemy with Blink Strike, and paralyze the enemy's abilities while Until not unrestrained with Smoke Screen. Riki is also one of the hero characters that is widely played with the 7th place, where he has more than 245 million players in this game.

Well, that's a 7 list of Hero characters that are often played in DOTA 2 games up to now. And it seems that when you look at the bottom of the sequence, we'll see ARC Warden and Underlord that are rarely played or as an option to wear with only 12 million times and 11 million times played out of the whole game. What do you think, is this Hero character in your favorite list?