Home MOBILE LEGEND How to Setting Gear Mobile Legends Tips For All Types of Heroes!

How to Setting Gear Mobile Legends Tips For All Types of Heroes!

Mobile Legends is now a MOBA game that is still in demand and played by gamers. For those who are still a novice and not yet skilled, increasing the level in this game is certainly not an easy thing. Therefore, one of the things that can be done is to make the most of the gear or items that the hero has. To make the most of the gear, you also have to know the tips of Mobile Legends gear that match the selected hero. This time Shortcutgame will give you some tips and also how to set Gear Mobile Legends that you can do easily: 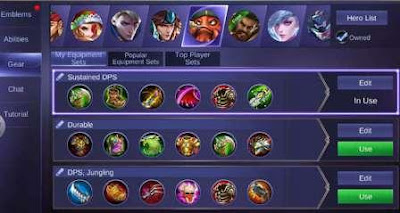 How to set Gear Mobile Legends, Tips for all kinds of heroes!

Basically, in the game Mobile Legends, there are several roles in which each role or role can be played to the fullest when the hero comes with the right gear. Therefore, for those who are not familiar with the role hero, see the following information:

This Hero has the main task as a melee attacker who helps marksman defeat the enemy. Because its position to be one of the important aspects to be considered from this hero is the defense side. Kaliancan equip hero fighter with defensive gear such as Swift Boots, Demon's Advent, Blade of Despair, Brute Force Breastplate, Tooth of Greed, and also Cursed Helmet.

At the time of the fight, the gear can give you the best defenses and powerful attacks on your opponent as long as you know how to use them. For example, the Brute Force Breastplate that can provide 3% of physical attacks with sustained effects 4 times this match is issued when the fighter hero replaces the tank hero that opens the fight path. If you want to focus on attacks while in attack mode, you can also take out the Blade of Despair gear which can give you 15% damage to your enemies.

This hero assassin has a role that is almost identical to the hero fighter, which is attacking the opponent's backline. Assassin heroes tend to fight guerrilla warfare, attacking opponents in stealth to deliver severe damage. Because of its character as a front attacker like a hero fighter, Mobile Legends gear tips that match the hero are also identical to the hero fighter. Examples are like the Brute Force Breastplate and Thor's Sting. These two gears can be used as interchangeable gears. For example, if the assassin hero like the Saber or Zilong you played does not have the Brute Force Breastplate gear, Thoru's Sting could substitute it to give damage to the opponent.

In the battle team, there are special heroes in charge of providing support in the form of defense and healing for their fellow team members. Examples of heroes suitable for this role are Estes, Lolita, Rafaela, and Minotaur. Because of the characteristics of this role is to improve defense and healing, the example of suitable gear is Dominance ice. This Gear can be used to minimize the speed of attack as well as the movement of nearby opponents. That way, cooldown time can be reduced and healing from damage will be more effective.

This Hero has the main task of being a remote enemy attacker to provide abnormal effects such as slow, stun, and so on. Mobile Legends Gear Tips for Heroes with this role can be applied by completing several items such as Clock of Destiny, Fleeting Time, Devil Tears, Magic Shoes, and Holy Crystal. Then, what kind of hero is suitable to be equipped with these gears? You can add them to heroes like Cyclops, Karina, Harley, or any other mage hero.

Each of the gear as mentioned above has its advantages in paralyzing the opponent. For example, Devil Tears can be used to launch attacks and magic penetration to opponents. When magic penetration is increased to 30%, the opponent's defenses can be confused, making it easier to defeat. Another case with the Blood Wings gear that can add damage as well as 2 HP per 1 magic attack.

The hero who plays the role of marksman or ultimate attacker is tasked with providing damage from afar to opponents who fight with hero fighter. One example of the hero marksman is Layla. Due to its characteristic of attacking rapidly and impacting critical effects, the most suitable gear for hero marksman characteristics are Wind Chaser, Thoru's Sting, Tooth of Greed, Blade of Despair, Blade of Destruction, and Rapid Boots.

This hero has the task of opening his team enemy defenses such as hero Fighter can enter the enemy territory and perform the attack. Since this hero also has a task as a shield, the suitable gear applied to the Tank hero is the gear for defense and HP. Examples of gear with such characteristics are Courage Bulwark, Oracle, Blade Armor, Demon's Advent, Cursed Helmet, and Tough Boots. These gear-gears can be equipped to the best tank hero you have such as Tigreal, Balmond, Franco, and many others.

Thus some ways of Setting Gear Mobile Legends that have been Shortcutgame boast to match each hero's role in the battle team in this game. Hopefully, the information can be useful to all you guys, congratulations on playing your Mobile Legends game!