The Ring of Elysium (ROE) can be a serious competitor to PUBG who is currently ramping in the Battle Royale genre. In addition to free to play, developers also provide some genius innovations that make this game worth a glance at gamers and become serious competitors of PUBG. It could be that in the future there will be professional competitions and international tournaments if you see the great potential of this PUBG-like game. 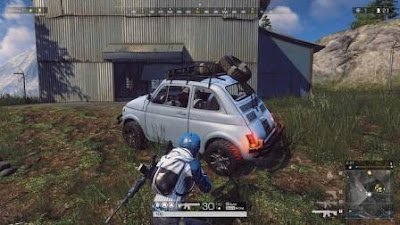 In many ways, the Ring of Elysium (ROE) looks similar to PUBG, in fact, it's quite natural because both have the same genre. But Ring of Elysium has a Class System with different mobility levels so that players have variations in the game, this is then that distinguishes Ring of Elysium with similar games on the market.

In the Ring Of Elysium (ROE), players can choose where the locations will start the game and between players can see the point where other players are at the start of the game. This is quite different from PUBG, where players plunge from the airplane then start looking for loot to get weapons and items.

This system allows the player to choose to start the battle from a certain point that corresponds to the style of each game according to the Class System pre-selected. So the player will not get bored with that game alone.

At the beginning of each game, each player will be asked to select a point where the location will start the play. Players will be given the freedom to choose 1 of 3 different Class systems. Each has different sensations and advantages. The available class System depends on the active folder until now there is 5 Class System.

Each System Class offers different levels of mobility, initial items at the start of the game, and methods of transport. Here you can be snowboarding, gliding or ziplining. This is the main feature of Ring Of Elysium that distinguishes it from PUBG and other games of a similar genre.

There is pretty much to be found in the map so that players don't get bored while browsing the map. A piece of Observatory on the Mt. Dione and Ocean Park folders on the Europa map. Even at Ocean Park developers give some ornaments like submarine and sea monsters.

Besides, movement in the Ring of Elysium (ROE) can be done in various ways following the pre-selected Class System makes the mobility in the game very high. The difference is very much felt when the player returns to play PUBG after playing ROE for some time. The game will feel much slower as there are only a few mobility options.

Overall ROE can compete closely with PUBG because some unique additions such as the System Class make the sensation of play even better. But considering this game is new and has a lot of potentials, there will be a lot of updates from developers that will make this game even more interesting and can be a real threat to games with other battle Royale genres.

Thus the review of the Ring of Elysium (ROE) is a Gadang challenger as a serious challenger to PUBG. Look forward to the latest news about games and gadgets only in Shortcutgame.